To share your memory on the wall of Ms. Eddie Hamilton , sign in using one of the following options:

Provide comfort for the family by sending flowers or planting a tree in memory of Ms. Eddie Hamilton

Provide comfort for the family of Ms. Eddie Hamilton with a meaningful gesture of sympathy.

Print
Eddie Mae Hamilton Jackson was Born to Titus and Clara Mae Sercy-Jackson on June 11, 1922 in Pittsburg, Texas and went to be with her Heavenly Savior on January 30, 2019.

She grew up in Pittsburg, TX and was baptized at Pine Bluff Baptis... Read More
Eddie Mae Hamilton Jackson was Born to Titus and Clara Mae Sercy-Jackson on June 11, 1922 in Pittsburg, Texas and went to be with her Heavenly Savior on January 30, 2019.

She grew up in Pittsburg, TX and was baptized at Pine Bluff Baptist Church. She attended Pittsburg Elementary School and graduated from Douglas High School in 3 years which was customary in the Jackson Family.

Eddie Mae began her working career in Denver, CO as the first African American Telephone Operator (PBX). She relocated to Dallas, TX in 1955, where she began a career in the garment industry as a specialty seamstress making custom garments for select clients. Eddie Mae returned to her beloved Pittsburg in 2010 to be near Family and Friends. Later in 2011 she moved to Richmond, TX.

She was preceded in death by her Father Titus Jackson, her Mother Clara Mae Sercy-Jackson, her Brothers T.J. Jackson, William Jackson and Clarence Jackson, and her Sister Eleanor Turner-Jackson. She is survived by her sister-in-law Carrie Bell Moffett, nephews Anthony Jackson (Elnora), Phillip Jackson (Karla), William Jackson, Jr., Karen Porter, Tisha Silva, and Keyna Turner. She also leaves many great and great-great nieces and nephews and friends who will sadly miss her.

Eddie Mae was a strong, determined and fiercely independent woman. She was devoted to her brothers and sisters; and, made sure she stayed connected with all of her nieces and nephews.
Read Less

To send flowers to the family or plant a tree in memory of Ms. Eddie Mae Hamilton , please visit our Heartfelt Sympathies Store.

We encourage you to share your most beloved memories of Ms. Eddie here, so that the family and other loved ones can always see it. You can upload cherished photographs, or share your favorite stories, and can even comment on those shared by others.

Guaranteed hand delivery by a local florist
AT

Posted Feb 17, 2019 at 07:20pm
We the United Methodist Women of Mt. Vernon United Methodist Church of Richmond, Texas would like the family of Mrs. Eddie Mae Hamilton to know that we loved her dearly and enjoyed playing bingo with her every 3rd Sunday at 3:00 o'clock. She always spoke about family especially her nephew that visited her often. She wanted us to meet him but we never got an opportunity to meet him. We were so sad to hear that she had passed. We didn't know until this Sunday. She was such a delightful lady very gracious. One of the ladies would have to assist her while playing because of her hands, but she would win. She would always thank our group of ladies for coming to on the 3rd Sunday. She will be missed.
Comment Share
Share via:
M

Posted Feb 02, 2019 at 03:59pm
As you celebrate the life of ‘one especially strong’ (Psalm 90:10); may you have the peace of our Heavenly Father and our lord Jesus Christ (1 Corinthians 1:3) to carry you through your grief, as well as the comfort of your good memories and the hope of the resurrection-Acts 24:15
Comment Share
Share via:
E 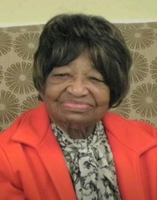