To share your memory on the wall of JoAnn Roberson, sign in using one of the following options:

Provide comfort for the family of JoAnn Roberson with a meaningful gesture of sympathy.

She was gifted and talented in many areas. Singer, song writer, music composer, piano and organ player, sketch artist, producer and seamstress.

Mrs. Roberson started out singing at church along with her brother Wilford at the age of 7. In the 80’s when she began her quartet singing career.

JoAnn sang with groups for 39 years and traveled all over the country singing for the Lord. She then started her production company “Two Crowns Records” adding new music to her long list of hits.
Read Less

To send flowers to the family or plant a tree in memory of JoAnn Roberson (Voner), please visit our Heartfelt Sympathies Store.

We encourage you to share your most beloved memories of JoAnn here, so that the family and other loved ones can always see it. You can upload cherished photographs, or share your favorite stories, and can even comment on those shared by others.

From your loving family in California. sent flowers to the family of JoAnn Roberson (Voner).
Show you care by sending flowers

From your loving family in California.

Posted Jul 05, 2019 at 02:52pm
Wishing you peace to bring comfort, courage to face the days ahead and loving memories to forever hold in your hearts.

From your loving family in California. purchased flowers for the family of JoAnn Roberson. Send Flowers

Posted Jul 03, 2019 at 04:05pm
JoAnn I will miss your presence, and cherish the friendship even after Neal passed away. Many of the things you prophesied have come to pass. Rest in peace for we shall see each other again when Jesus comes. Tommie "Toni" Martin
Comment Share
Share via:
ML

Posted Jul 01, 2019 at 09:44pm
My sympathies to family and friends of Mrs. Roberson: Isaiah 25:8 tells us that Almighty God will abolish death forever. And Isaiah 65:19 indicates that God’s people can be glad now, because of the hope that soon neither the sound of weeping nor the cry of distress will be heard again. (Revelation 21:1, 4)
Comment Share
Share via: 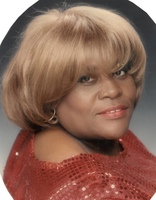