To share your memory on the wall of Golden Murphy, Jr., sign in using one of the following options:

Provide comfort for the family of Golden Murphy, Jr. with a meaningful gesture of sympathy.

Print
God was gathering a bouquet of His favorite flowers on Tuesday, August 14, 2019. He picked from His earthly garden a champion blooming rose with many ribbons and accolades, Golden Murphy II.

Golden was born on June 18, 1918, in Pittsb... Read More
God was gathering a bouquet of His favorite flowers on Tuesday, August 14, 2019. He picked from His earthly garden a champion blooming rose with many ribbons and accolades, Golden Murphy II.

Golden was born on June 18, 1918, in Pittsburg, Texas, to the late Lela Austin Murphy and Golden Murphy. He went to school part-time in Pittsburg, Texas. He later joined the U.S. Army Air Force in 1942, and served until 1946. He fought in Okinawa as part of World War II. Golden moved to Fort Stockton, Texas, where he worked at Fort Stockton I.S.D. for 20-plus years. After retiring, he made his way back to Pittsburg, Texas, to be close to his children. He spent the rest of his time with relatives and enjoying life.

Golden married his wife, Mary L. Armour, in 1946. They had four children: Golden Murphy III, Dell A. Murphy, James H. Murphy, Raymond E. Murphy. His wife, and son Raymond Murphy, preceded him in death. He is also survived by a host of grandchildren, great-grandchildren, nieces, nephews, cousins, and friends. Special thanks to daughters-in-law, Dinah and Dedra Murphy.
Read Less

We encourage you to share your most beloved memories of Golden here, so that the family and other loved ones can always see it. You can upload cherished photographs, or share your favorite stories, and can even comment on those shared by others.

Flowers were purchased for the family of Golden Murphy, Jr.. Send Flowers

Posted Aug 14, 2019 at 06:26pm
To the family I extend my sincere sympathy in your loss. Praying you will be comforted by the long fruitful life Mr. Murphy lived. 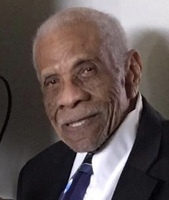