To share your memory on the wall of Hardy Teycer, sign in using one of the following options:

In 1947 at the innocent age of 12, still wearing rolled up Levi Briches, walking barefooted down a clay top road, chunking rocks and kicking cans on his way to Mr. Wilson Jones Grocery Store. This was Hardy’s First Job. He was a takeout grocery boy. One day Mr. Wilson was short handed and asked Hardy to be the cashier. Hardy then became the first African American Cashier in Mt. Pleasant, Texas.

Hardy graduated from Booker T. Washington High School with the prestigious class of 1953 in Mt. Pleasant, Texas. He then started working at the packing house where he butchered cows for the market. Until he was drafted into the United States Army where he was stationed in Korea. He served his country faithfully for four years until he was honorably discharged.

Hardy later enrolled at Texas Southern University in Houston, Texas where he majored in Economics and Business. He started his own business in Houston in the 1960’s and 1970’s. He moved back to Mt. Pleasant in 1982 where he met and married his wife of 37 years, Janice Norman. He began working for Texas Utilities Mining Company, where he became a member of the International Brotherhood of Electrical Workers until he retired in 1993. Following retirement started a daycare center along with his wife to serve working mothers and their children. He also established an assistive living home where he successfully served the public for two decades until 2010. Following his wife’s retirement they both enjoyed the rest of their life, just around their home. Mr. Hardy favorite enjoyments were sports, fishing, football, golf and an every now and then kiss from his wife and hold her hand.

To send flowers to the family or plant a tree in memory of Hardy Arthur Teycer, please visit our Heartfelt Sympathies Store.

We encourage you to share your most beloved memories of Hardy here, so that the family and other loved ones can always see it. You can upload cherished photographs, or share your favorite stories, and can even comment on those shared by others.

Janice and Family-- We were saddened to learn of Hardy's death on Sunday night. W realize that death will come to all of us at Gods appointed time but miss our friends and loved one as they go from this earth. Please be comforted knowing Hardy is not suffering. Hardy and I grew up living next door to one another. There were six children in the block. Hardy's father was principal of Booker T. Washington when we all started school. Hardy played Saxophone in the Band and had first chair as we called it. Hardy expressed himself as he saw things and didn't leave one to wonder what he was thinking. The last few years has been tough on him not being able to go as he was accustomed to. Hardy, Rest in Peace with our Lord and Saviour!
MN

Our deepest sympathy to the family in your loss. May God bless and keep you. 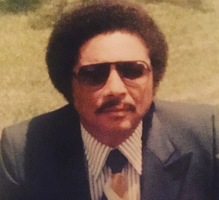