To share your memory on the wall of Blondie Frazier, sign in using one of the following options:

Print
Blondie Marie Frazier was born in Gilmer, Texas on July 24, 1958 to Willie Lee and Nellie Ruth Anderson. She was baptized at Snow Hill Baptist Church at an early age. She graduated from Ore City High School in 1976.

Later in life sh... Read More
Blondie Marie Frazier was born in Gilmer, Texas on July 24, 1958 to Willie Lee and Nellie Ruth Anderson. She was baptized at Snow Hill Baptist Church at an early age. She graduated from Ore City High School in 1976.

Later in life she worked at Pilgrim's Pride for 22 years and after that she worked at Lowe's Distribution Center where she retired. Blondie was a member of Maranatha Ministries Church of God in Christ and President of the Usher board until her health failed her.

To send flowers to the family or plant a tree in memory of Blondie Marie Frazier (Anderson), please visit our Heartfelt Sympathies Store.

We encourage you to share your most beloved memories of Blondie here, so that the family and other loved ones can always see it. You can upload cherished photographs, or share your favorite stories, and can even comment on those shared by others.

The Glenn Bickerdike family; Mary Ray; The Monk Fa, Meagan, Chris and Olivia, and other have sent flowers to the family of Blondie Marie Frazier (Anderson).
Show you care by sending flowers

Posted Jun 10, 2020 at 11:28am
Tiffany and family, Chris, Olivia and I send our deepest condolences and love. We wish we could have made it. She touched our family in so many ways.

Meagan, Chris and Olivia purchased flowers and planted a memorial tree for the family of Blondie Frazier. Send Flowers

Your Crusader Family purchased flowers for the family of Blondie Frazier. Send Flowers

Lana Anderson and Leah and Chase Bickerdike purchased the Sentiments of Serenity Spray for the family of Blondie Frazier. Send Flowers

Posted Jun 05, 2020 at 04:51pm
I remember going to school with Blondie , she was one of the most sweetest kindest person you ever want to meet, even when I ran into her years after graduated she was still the same sweet person I knew in school. Love and miss you sweet lady ❤️💕
Comment Share
Share via: 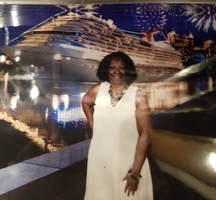