To share your memory on the wall of Virginia Bussey, sign in using one of the following options:

Virginia was a proud graduate of Booker T. Washington High School in Tenaha, Texas. She attended Mississippi Valley State University where she graduated with a Bachelor of Science degree and later attended East Texas State University. She began her career in education at Booker T. Washington in Tenaha, Texas as a coach. She later went on to teach in Springhill, Louisiana, in 1972 and then she started teaching for the Mount Pleasant Independent School District. She retired 39 years later in 2011. She was known for her hard work and kindness to all, hence the nickname “Sugar Pie.” She spent many hours volunteering as a coach and organizer for the Special Olympics. She truly believed and lived out the statement “No child left behind.”

She was preceded in death by her parents, her sisters Mildred Bryan and Joann Bering.

To send flowers to the family or plant a tree in memory of Virginia Jane Bussey, please visit our Heartfelt Sympathies Store.

We encourage you to share your most beloved memories of Virginia here, so that the family and other loved ones can always see it. You can upload cherished photographs, or share your favorite stories, and can even comment on those shared by others.

Posted Nov 27, 2020 at 07:08pm
Aaron, I am so sorry for the loss of your mom. Ms. Bussey was a great friend and coworker at Vivian Fowler. My prayers for you and your family 🙏🙏🙏
Comment Share
Share via:

Posted Nov 27, 2020 at 09:30am
I am so thankful that i was able to meet her even if it was only a few brief encounters. Her soft smile and sweet disposition always made me feel welcome. My heart goes out to all of her family and friends.
My condolences and prayers.
Jenette McGinnis
Comment Share
Share via:
DA

Posted Nov 27, 2020 at 08:05am
Our Sincere Condolences to Aaron and the Family. The Bussey Family in Tenaha, Texas were an extension of our family. The Samuels Family.
My fondest memory of Sugar Pie was her infectious smile and kind words. My Mother, Barbara, and her sister, Joanne, were the best of friends. Every visit to Tenaha, I would accompany my Mama as she visited with them after church. A great woman of God has received her crown and is resting with a Jesus.
Debra Samuels Allen
Comment Share
Share via: 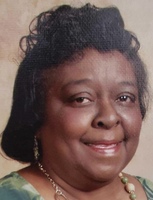