To share your memory on the wall of Queennie Thomas, sign in using one of the following options:

To send flowers to the family or plant a tree in memory of Queennie Eugene Thomas, please visit our Heartfelt Sympathies Store.

We encourage you to share your most beloved memories of Queennie here, so that the family and other loved ones can always see it. You can upload cherished photographs, or share your favorite stories, and can even comment on those shared by others.

Posted Jan 13, 2021 at 02:56pm
Very appreciative of the extensive US Naval Service of Queennie Thomas for our country during a very challenging period of our nation's history. Prayers are going up to heaven for comfort for his family and many friend in their loss. May he rest in this his last and heavenly deployment with his beloved Savior Jesus (and maybe he can say hello to John Wayne :-)). Thank you Lord for men such as this
d huffman, Army vet, DFW Honor Guard member, and chaplain
Comment Share
Share via: 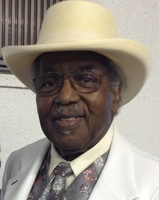